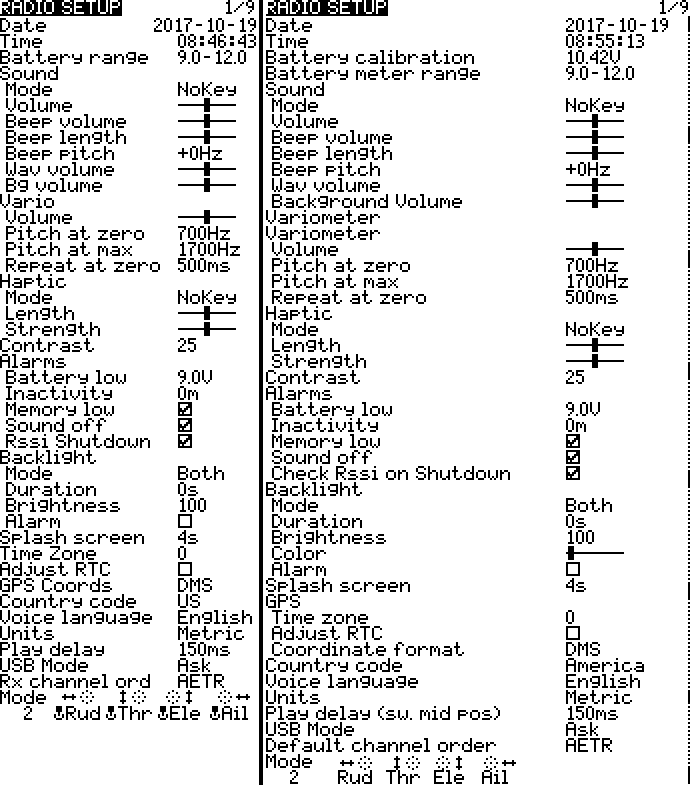 The date in YYYY-MM-DD format. This is used in log files.

The time in 24 hour format. This is used in log files.

Adjust this value to match the transmitter battery voltage measured using a voltmeter.

Only available on the Taranis X9 Series. The X7 has the same configuration on the ANALOGS screen. More…

The battery range is used to scale the battery meter gauge.

Here are some suggested ranges based on tests. More…

Sounds are made in two ways. The first is transmitter generated beeps and tones and the second is by playing wave files on the optional SD Card. More…

Configure if sounds are made when the buttons are pressed.

The main volume that overrides all other volumes.

The volume for transmitter generated beeps and tones.

The length of the transmitter generated beeps and tones.

The pitch/frequency of the transmitter generated beeps and tones. The frequency can be changed up to +300 Hz from its default value

The variometer is used by gliders to track sinks and climbs.

The volume for transmitter generated sink and rise tones.

The pitch/frequency at the start of the sink or rise range configured on the model’s TELEMETRY screen (more…). The frequency range is from 300 to 1,100 Hz.

The pitch/frequency at the end of the sink or rise range configured on the model’s TELEMETRY screen(more…). The frequency range is from 500 to 2,100 Hz. The lower number is auto adjusted in the pitch at zero increases to within 200 Hz. For example if the pitch at zero is 1,000 Hz then the pitch at max forced to be at least 1,200 Hz.

The gap in milliseconds before the tone repeats. The range of value is from 200 to 1,000 milliseconds. This is equivalent to 5 beeps per second to 1 beep per second.

The transmitter vibrates. This is available in the Taranis X7 series X9D Plus series and the X9E.

Configure if vibrations are made when the buttons are pressed.

A slider that adjusts the length of the vibrations.

A slider that adjusts the strength of the vibrations.

The transmitter battery low level at which a sound or announcement is made.

Here are some suggested ranges based on tests. More…

The inactivity time in minutes after which a sound or announcement is made as a reminder that the transmitter is still on. Inactivity is tracked based on moving a stick, switch, knob or pressing a navigation button.

An alarms disabled warning is displayed when the transmitter is turned on if the sound mode is set to quiet. More…

A warning is announced and displayed when the radio is being shutdown with a receiver on and connected. If the shutdown continues a confirm shutdown screen is displayed with the option to press ENTER to shutdown or press EXIT to not shutdown.

The LCD has a backlight to help read the display in low light conditions.

The length in seconds that the light is on. At zero seconds the light stays off all the time except when the mode is set to on. The values increment in 5 second jumps up to a maximum of 600 seconds.

The backlight intensity from 0% (off) to 100% (maximum) brightness.

The lcd backlight light turns on when there are alarms.

The duration in seconds the start up screen is shown for. Setting this to zero disables the splash screen.

The FrSKY GPS sensor’s values are adjusted or formatted based on these settings.

The time zone to be used with a GPS. This is a UTC value from -12 to 12 hours. Only integers are possible. More…

Adjust the real time clock, the transmitter’s clock, to match the time determined by a GPS sensor.

The GPS coordinate format for the display. The logs are always in decimal format.

The radio is set to be complaint with regulations related to radio wave transmission. This information is sent to  internal XJT module which takes care of the regulatory requirements.

Note: 2017 October 7 – This may be used in the future by internal GPS modules for transmitters that have them.

The language of the announcements when an SD Card with a voice pack is present. More…

The default telemetry units. For example a temperature sensor will default to Celsius instead of Fahrenheit if this is set to metric.

Enable Federation Aeronautique Internationale (FAI) mode. It disables all telemetry displays, other than RSSI and voltage, to comply with FAI regulations for contests, championships, and record setting activities. Once engaged, this option remains in effect until the firmware is re-flashed.

This setting is present if selected as a build option when the firmware is downloaded. More…

The behaviour when a USB cable is connected a computer and the transmitter while both are on.

The transmitter stick mode is the arrangement and use of the control sticks.

It is essential that this matches how the sticks are configured and used.

Mode 1 and 2 are the most common configurations used.