This is where sensors are added to the model and configured. Up to 32 sensors may be managed.

FrSKY sensors are added from the telemetry screen.

Telemetry units and decimal precision are automatically configured for FrSKY sensors. Their minimum and maximum values are also automatically tracked.

Settings such as sensor name, auto offset, filtering, persistent storage at power off, turning logging on and off are configurable. Note that for logging to work logs have to be configured on the special functions screen as well (more…).

Duplicating sensors are allowed and each copy may have different configurations. For example their units may be changed so that one sensor may have its units in meters while another copy of it has it in feet. Another example is to configure them so that one sensor gives the altitude above sea level while the other gives the altitude relative to ground.

Calculated sensors use one or more sensor to calculate a value. For example a current sensor may be used to calculate the mAH used. Another example is adding the voltages from two different voltage sensors. There two examples can be combined to calculate power (voltage x current).

RSSI is the relative received signal strength in a wireless environment, in arbitrary units. RSSI is an indication of the power level being received by the receive radio after the antenna and possible cable loss. Therefore, the higher the RSSI number, the stronger the signal. More…
– Wikipedia 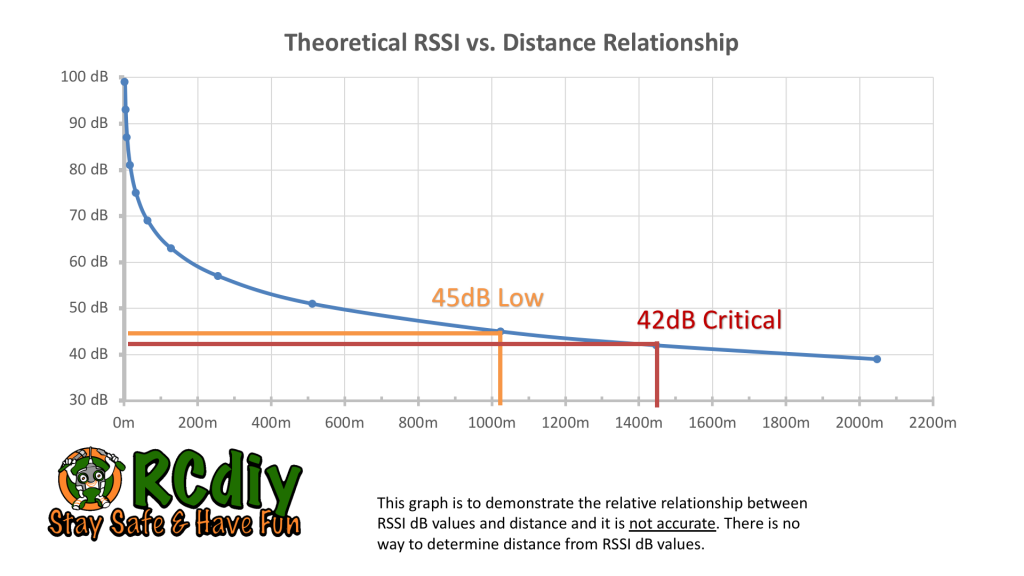 When the RSSI value goes below these values (45 and 42) an audio alert is heard. It is recommended that these values be kept unchanged.

If an SD Card with the appropriate sound pack is present then the alerts are announced else beeps will be heard. More…

The RSSI low and critical alerts will not occur.

When loading the model a warning will be displayed.

A list of sensors connected to the system. Sensors may be selected and edited.

The sensor being used for the variometer.

The climb and sink range within which to change the variometer tones.

The range within which to ignore climb and sink.

Play a tone or stay silent within centre range.

When the connection to the sensor is lost for about ten seconds an audio alert is heard. If an SD Card with the appropriate sound pack is present then the alerts are announced else beeps will be heard. More…

When the connection to the receiver is lost or recovered an audio alert is heard. If an SD Card with the appropriate sound pack is present then the alerts are announced else beeps will be heard. More…

Add A Custom Or Calculated Sensor

The name as it appears is source lists.

Each sensor has two auto generated sensors for their minimum and maximum values. They share the same name with a negative and positive symbol added to the end.

The settings available and their behaviour change depending on the type of sensor. 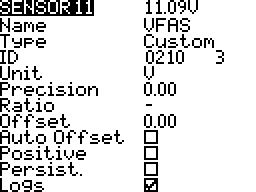 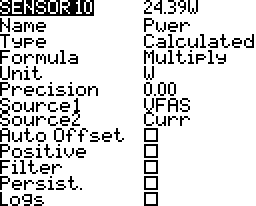 There are a number of formulas that are available. These are covered in the calculated sensors section below.

The units of the sensor values. There are over twenty units available. Some examples are meters (m), kilometers per hour (km/h), feet (ft), and fluid ounces (fOz). These units are important for display and audio announcements of sensor values.

The number of decimal places to display. The value is not rounded; Digits are truncated.

The multiplier to use to get the correct reading; Usually in volts. Using a multimeter measure the voltage. If the multimeter voltage and sensor voltage do no match adjust the ratio until they match. More…

Only use positive values. If the values are negative return zero.

Used to smooth values that change a lot. Values are averaged over the sensor’s last few reported values.

Values are retained between model changes and power cycles. The next time the model is loaded the last recorded sensor value is retained. For example the last mAh is added to the present mAh calculations to get a total over multiple flights.

The sensors values will be added to the logs if logs have been setup and enabled on the special functions screen. More…

Select the Variometer source and settings. A variometer provides a glider’s sink and climb rates using an altitude sensor. As the aircraft sinks and climbs a tone is heard and its pitch changes.

The range within which to change the variometer tones. Sink and climb rate limits when the tone pitch change stops. Beyond these limits the tone stays the same. The units are that same units as the variometer source; meters per second or feet per second.

The range within which to ignore climb and sink. When the climb and sink rates go outside these settings the tone changes pitch. The units are that same units as the variometer source; meters per second or feet per second.

Add telemetry source values. Up to 4 sources. For example add individual cell voltages to get the total voltage. 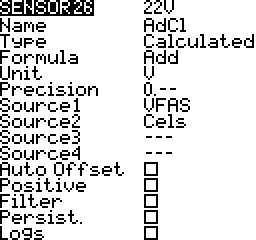 Average  telemetry source values. Up to 4 sources. For example the average voltage of individual cells. 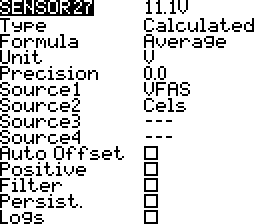 Minimum value from source values. Up to 4 sources. For example the minimum voltage of individual cells. 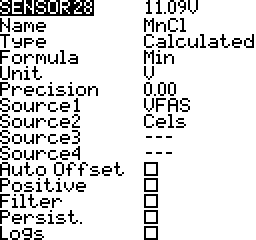 Maximum value from source values. Up to 4 sources. For example the maximum voltage of individual cells. 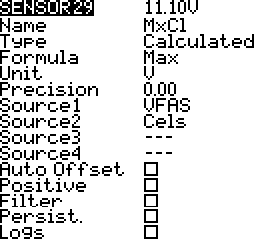 Multiply two source values. For example current multiplied by voltage to give power in watts.

Adds the sensor value to a cumulative total. This was developed for a fuel sensor that did not get released. More… 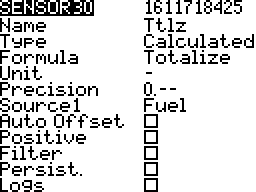 This is for the FrSKY lipo sensor that connects to the lipo balance connector.

Volage of a particular cell.

The difference in voltages between the highest and lowest cell voltages.

The mAh used based on the current sensor values.

Telemetry switches are active when telemetry data is being produced. These switches are used on model menu special functions and logical switches screens as an activation switch.

A special function could be configured so that when the GPS altitude sensor is sending telemetry have its value announced every fifteen seconds. When there is no telemetry yet or telemetry has been lost do not announce its altitude.

Switch inactive: GAlt telemetry not being received, no announcements.

Switch inactive: Throttle is idle or telemetry is not being received.

Switch active: Throttle is not idle and telemetry is being received.